Any spec's, pic's and pricing of the wood mule?

Has anyone had an experience like this?
I recently  noticed that when I go up high on the neck of my 12 fret single cone resonator- like to fret 12, especially on the high e string, the string is hitting on the higher frets so that the note does not speak well. I sighted the neck to see if it was curved and it seems that when the neck hits the body of the guitar it curves upward. So essentially it is like the fretboard has a "kink" in it. Also I noticed that the fingerboard has a space where the neck joins the body.  I took it to my guitar tech, Tucker Barrett( formerly of Froggy Bottom Guitars) and he confirmed that there was a problem. This is a shame because I'm about to leave for Memphis to represent Vermont in the International Blues Competition as a solo act (which I won in the state last October). I probably could still play it, but I really think I should send it to Mule to be repaired.Is there any warranty for an issue like this????

I had this happen with my Mule-

Matt was kind enough to replace the neck for me.

Reach out if you have more questions-

Thanks Mr. Pinebox (like the name).  I sent it back to Matt and he paid the shipping -great guy! Gee I hope he doesn't have to replace the whole neck.

Can anyone tell me what gauge strings are normally on the Mule (What they come with?)

Is a single cut version possible?

Does anyone know if the top and back are completely flat or do they contain a slight radius. Seems like the top and back could be thicker than a regular flattop because you want the resonator to produce the sound, not the top. Therefore with a heavier build you might not need the extra strength that an arched top and back provide?? Would love to hear thoughts on this!

Hey John - both the top and back have a slight radius, a bit shallower than normal acoustic guitars.  The top is thicker since that is taking about most of the support responsibilities.  But the back is normal acoustic back thickness.  The idea that you want the cone to "do the talking" is one way to build resonators, but we want to build resonators that kind of bridge the gap between traditonal reso tone and acoustic guitars.  We do that mainly by treating the backs of the guitar smore like acoustic guitar backs than has been the case.

Interesting, thanks for the explanation.

Hey Mike!  the body is torrefied maple. Pricing will be similar to resos but it will they will only be available off the website (now wait list) and whenever I make them. Sometimes I get the fever! You'll want to stay tuned to the emails. It will be a few months before I start selling them. 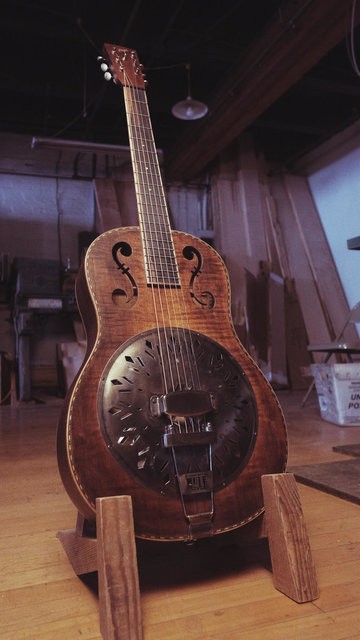 man, that thing is beautiful. I saw someone ask a while back on IG if you made wooden resos and was quite surprised to see this pop up! I look forward to some video footage!

You're in luck! More videos to come - https://youtu.be/B5n-7GdjRNQ