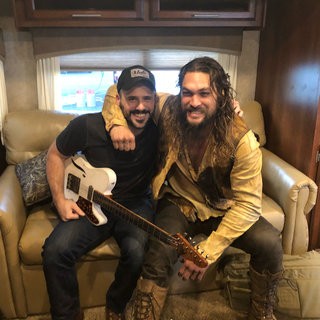 "Wow, man, look at that. This is craftsman level, it’s so beautiful. Dirty pink!" - Jason Momoa upon taking delivery of his Mulecaster.

American actor, writer, film producer, and director. He is known for portraying Aquaman in the DC Extended Universe, beginning with the 2016 superhero film Batman v Superman: Dawn of Justice, and in the 2017 ensemble Justice League and his 2018 solo film Aquaman. He is also known for his television roles as Ronon Dex on the military science fiction television series Stargate Atlantis (2004–2009), Khal Drogo in the HBO fantasy television series Game of Thrones (2011–2012) and as Declan Harp in the Netflix series Frontier (2016–present).