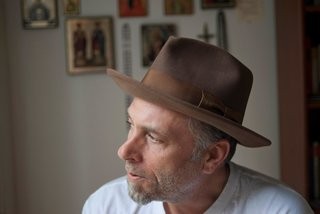 "When I heard Kelly Joe the first time, I was amazed how it all made so much sense. His music is a wide world with three hundred and sixty degrees of influence.... Kelly Joe is a musical slight of hand master. He pulls world wide sounds out of his guitar." - Tim O'Brien

"Kelly Joe Phelps plays, sings, and writes the blues. HOLD UP before you lock that in - forget about songs in a twelve bar three chord progression with a two line repeat and answer rhyme structure - though he can certainly do that when he wants to. I'm talking about a feeling, a smoky, lonesome, painful - yet somehow comforting groove that lets you know that you are not alone - even when you're blue. Play on brother." - Steve Earle

It’s as thin as the edge of a razor, the road separating Heaven from Hell, sin from salvation, redemption from despair. It’s a lonely road to go down and like the old gospel says, you’ve got to walk it for yourself. Kelly Joe Phelps has been doing lot of soul searching since his last record, ‘Western Bell’ came out in 2009. Three years later, his journey has wound its way to a recording studio in Vancouver, and Kelly Joe has once again beaten a path to Steve Dawson’s door with a new batch of songs tucked into his satchel that reflect both the new insights gained along the journey as well as things that have been dropped by the wayside. Together Phelps and the veteran producer embarked on a three day recording odyssey that marked their fourth collaboration since Dawson played slide on ‘Slingshot Professionals’, produced ‘Tunesmith Retrofit’ and released ‘Western Bell' after it proved too daring for Rounder Records. The result is ‘Brother Sinner and the Whale’, a record that may very well come to be recognized as the best of an already very impressive body of work.

Since his debut album ‘Lead Me On’, came out in 1994, the Pacific Northwest based singer and songwriter has written and performed some of the most compelling slide guitar based music ever recorded. Though he spent his early years playing free jazz, he has never strayed too far from the roots music world that has become his passion. “I’d spent all this time learning improvisational music, but I’d always had an attraction to folk based music forms. So, I was listening to a lot of Chet Atkins, Merle Travis and some of the newer people like Leo Kottke and John Fahey. My music is a reflection of all the music I loved and steeped myself in. There’s a space and openness in rural music that makes sense to me.” Playing a lap slide in a style that both evoked the sounds of the ancients and pointed towards new possibilities for the instrument, Kelly Joe’s music seemed to originate in another time as he sang with the voice of an old soul, weary with experience, yet excited with all of the prospects that life brings.

After several years of exhaustively exploring the potential of his slide, Phelps’ attention gradually shifted from instrumental virtuosity towards an emphasis on songwriting. “I wanted to keep moving forward, so I began to spend more effort thinking about my songs and not so much about the guitar because ultimately, I got bored with it because I felt that I had found all I could for myself within that sound. So, the work felt finished to me.”

Phelps’ inquisitive mind and restless spirit have always carried him forward to new forms of expression, but experimentation is not without its costs. When ‘Western Bell’ baffled his record company, puzzled some fans and failed to create new audiences for his work, Phelps pulled back from recording to search for a new direction. Unexpectedly, inspiration came through a re-­examination of his Christian roots, and resulted in an unexpected flurry of creative activity that gave birth to a whole new set of songs and a reinvigorated approach to playing the guitar as Phelps opted to play bottleneck rather than his customary lap slide to achieve a sound that wouldn’t have been out of place on a classic John Fahey or Reverend Gary David record.

With song titles like ‘Talking to Jehovah’, ‘I’ve been Converted’ and ‘The Holy Spirit Flood’, there’s no escaping that something has grown and changed in Kelly Joe’s world. Phelps’ lyrics fuse poetry from the Book of Jonah and the vintage gospel blues of Mississippi John Hurt with aspects of the early gospel work of Bill and Charlie Monroe thrown in for good measure to create what surely must be the most literary gospel songs recorded since Bob Dylan’s incendiary Christian albums came out three decades ago.

Phelps explains some of the motivation behind the new songs. “ I’d arrived at a place where I was sinking. I had to do something or my head was going to blow up or my heart would stop. When I found a way to allow myself to open up to creative impulse, this is what was staring me in the face and I did not want to say no to anything.” For those who have followed Kelly Joe’s music, this change isn’t too surprising as it represents a natural growth from the rural routes his music has tread until now. “This is going to be referred to as a gospel record, I suppose. The music is presented in an ancient form, but it’ll sound contemporary because of the way I play and write. But, thematically, I’m basing my compositional approach on old styles like the old blues and folk guys played.”

Thematically, Phelps doesn’t balk at ‘Brother Sinner and the Whale’ being described as a concept record. “It’s like a book. First, there’s ‘Good-­Bye to Sorrow’ and it’s like the foreword and all the other songs are like chapters in that book. ‘Hard Times Have Never Gone Away’ says that just because you believe, it doesn’t mean that life is going to stop being hard or even change in its intensity. It means that your focus is shifting in how you’re going to handle it or how you’re going to understand it. Very few things are ever likely to change overnight." While that may be true, it’s still amazing to consider how three days spent in a recording studio have allowed Phelps to redefine who he is as an artist with a solo record that builds on all of his lyrical, compositional and technical strengths to form the best album of his career. It is as Phelps says, ‘the kind of thing that lights a fire under one’s boots and in one’s belly.’ Listen to ‘Brother Sinner and the Whale’ and you’ll certainly agree.