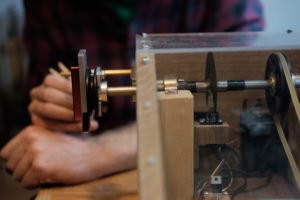 Okay. Here goes. We like making stuff.  Like, a lot.  But we like doing things that aren't being done. This is how Mule was born, how I learned what I needed to learn to make it happen. One day we got it into our heads that since we were now making electric guitars we could also make pickups.  We were not pick up makers. So we took things we liked about different types of pickups and put them into a pile of ideas, and tried to think about what parts made what sounds.  Then we made some pickups. The Mighty Smithers worked hard into many nights trying new things just to have me be critical the next day. A mighty warrior. And then we had it. We made a pickup that I found myself thinking about in the days that followed, but the guitar was at the shop and I couldn't play it. It's hard to describe the sound, like any sound. It's clear but not too clear. We don't like muddy neck pickups (or tone controls for that matter).  Humbucking is a big plus. We like low output pickups.  What I personally think this guy does best at is that slightly dirty tone.  But THE FEEL. It's so responsive, I havn't played a pick up that was so responsive. I know its' special because we made plenty of pickups similar to this that were not so. It reacts. It's awesome.  We will be putting them in our guitars, and in January will be available on mulestuff.com. You'll be hearing a lot about these because I'm crazy excited about them. Matt
Like (1) Dislike (0)
Follow
Comments
Please log in or sign up to comment.

I was honored to get a call coming from a friend as he found
out the important points shared on the site. Looking
at your blog posting is a real wonderful experience. Thanks again for
taking into account readers at all like me, and I desire for you the best of success as a professional in this field.

This is a really good tip particularly to those new to the blogosphere.
Short but very accurate info? Thanks for sharing this one.
A must read post!

Thank you for the good writeup. It in fact was a amusement account it.
Look advanced to more added agreeable from you! By the way, how
can we communicate?

I'm now not sure the place you're getting your information, but great
topic. I must spend some time studying much more
or understanding more. Thank you for excellent information I was in search of this
info for my mission.

It's going to be ending of mine day, except before end I am reading this wonderful paragraph to improve my knowledge.